The Last Greeks of Alexandria 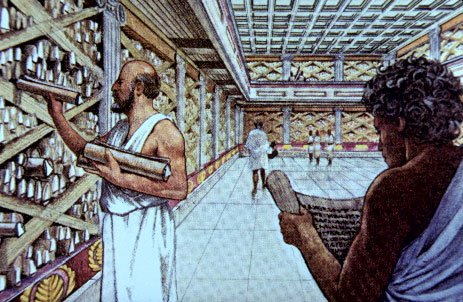 I thought it might be fun to post the first chapter of one of my unpublished novels, a historical thriller entitled The Last Greeks of Alexandria. The novel was about a quest to rediscover the famous library of that great city… my hopes for publication were dashed when, just as I was finishing the book, Pan Macmillan signed a novel by A.M. Dean on exactly the same topic. It even had a female lead character. These things happen in publishing; writers often think along the same lines and it was amazing that nobody had written this thriller before. Bloody unlucky really, but it was back to the drawing board. I finally got published with my next effort, Foretold by Thunder. Hope you enjoy it!

There was little to raise suspicion about the first combatant in what became dubbed the Battle of the British Museum. Security scarcely registered the smartly dressed gentleman of Middle Eastern appearance trotting through the main entrance and, with distinct clarity of purpose, making his way to the Great Court. He had thin angular features and diagonal cheekbones that lent something of the razor blade to his face. A copy of Le Monde was tucked under one arm and he could easily have been a Parisian academic or a visiting tourist. Nobody commented on his unusually trim frame and darting, potent movements.

The second protagonist was a more arresting sight; indeed staff recalled seeing her on several occasions in the days leading up to the rampage. Her head was shaved in a brutal number one cut and she wore a vast woollen jumper gaping with holes. She had three piercings and a tattoo of an acorn behind one ear. She was in her mid-thirties and her face wore signs of hard-living; but it was her eyes that grabbed the attention. They were a slake of bright blue and seemed to smoulder through her ruddy face with joy and rage. She bounded through the Great Court with purposeful strides, hot on the heels of the first suspect.

There are no CCTV cameras in the research facilities of the British Museum, which are out of bounds to the public. So detectives piecing together the events later were unable to deduce for certain what had transpired in the closeted world of the Ancient Near East Department. But it being lunchtime, the museum was heaving with punters. So what happened next was witnessed by hundreds of tourists, captured on dozens of mobile phones, recorded with forensic scrutiny on the cameras of the west wing. The ‘staff only’ door exploded outwards and from the department burst the man, one hand grasping something unseen inside his suit jacket. A group of schoolchildren were congregating in the corridor, blocking his route to the covered courtyard and out of the museum, and he turned to see the woman descending upon him murderously, hollering like a banshee. He bolted up one of the grand marble staircases that stand at each corner of the museum and she followed, taking two steps at a time, never ceasing a barrage of invective that elicited delighted gasps from the children. Their teacher recalled afterwards that, amid the tide of profanities, she had shrieked something in a Deep South accent about “the professor’s tablet”.

The man emerged on the first floor and darted into one of the Greek galleries, the American in hot pursuit. They thundered past an exhibit of gold jewellery, the paper thin leaves of a golden wreath rattling against each other as the gale passed through. But the distance between the two was widening. The man was fleet of foot and in the peak of physical condition; and after the staircase, her fury was giving way to leaden limbs. She seized the nearest artefact, a hefty terracotta flask in the form of a squatting African man. Taking a second to poise herself, she leaned backwards and hurled the object at the disappearing form of the stranger. The throw was imperious, that of a Superbowl-winning quarterback at the height of their powers. The flask arced upwards, reaching the zenith of its trajectory in the high ceiling of the gallery before spinning viciously down towards its target like an incendiary bomb. The African’s quixotic grin never diminished as he smacked into the back of the man’s neck with the satisfying crack of heavy clay on vertebrae, sending the target sprawling into a colossal limestone statue of a bearded king.

For more than two millennia the regal Cypriot had kept his poise. Now he toppled forward like a felled tree and crashed to the floor, decapitated in a cloud of marble dust. An overweight security guard leapt from his chair with a howl of fury to join the chase.

The man was momentarily dazed and sat spluttering, enveloped in a galaxy of chalky white. His pursuers were upon him.

Realising the danger he sprang to his feet like a startled gazelle and was off, dashing into the first of the Roman galleries. The security guard was already off the pace; yet the woman, who seemed to be enjoying the brouhaha, was feet behind. They passed the baleful stare of Augustus, a tour group admiring the green-bronze bust of Rome’s greatest emperor.

“He put Rome on a sound defensive footing,” came a snatch of the guide’s droning. “And the other thing he is remembered for …”

The group scattered in a cacophony of outraged exclamations as the pair barged past. One by one the marble busts of Rome’s most infamous emperors flickered by; first Nero the debauched, then thick-set Vespian, Hadrian with his Herculean shoulders and the boyish countenance of his lover Antonius. In death Nero watched the chase with a dignity he seldom mustered in life as the chariot race reached its crescendo.

But now the woman was gasping and wheezing, an abhorrence of exercise rudely apparent. The man had drawn away again and was at the far end of the gallery, about to disappear down the grand staircase at the museum’s south-west corner. In desperation she scanned for potential ammunition. To her left was a cabinet displaying the wares of Roman gladiators. The display was being rearranged and the curator had left it unlocked. There were a selection of iron spear points and short flat swords, pitted with age but viciously sharp. Her hand wavered – she didn’t want to actually kill him. Instead her gaze alighted on the helmet of a long-dead murmillo gladiator. It was a sinister sight, two webbed eye guards bulging from a mask of tempered iron like the eyeballs of a fly. She grabbed it by the helm and hurled it at her opponent with both hands. The helmet was unwieldy and there was nothing graceful about this throw – it wobbled awkwardly through the air, overshooting the intended victim and shattering a cabinet ahead of him. The man glanced back fearfully, hunted, aghast at the onslaught. He had been briefed to expect meek academics, underpaid security guards – the kind of people whose necks could be broken with ease. But how to fight such a vision of ferocity? Who was this Gorgon? Already the monster was reaching back into the gladiator display. Instinctively he reached into the shattered cabinet and returned fire with the first object to hand, a Greek wine cup decorated with the humble image of a carpenter cutting leather in his workshop, pointed slippers dangling above his head. One could make out where it had been repaired after some long-forgotten mishap, but rather a tasteful little scene it remained. The man threw it like a Frisbee, hard and true; it whizzed across the gallery making a beeline for her face. She ducked at the last moment, the artefact impacting into its constituent atoms against the wall behind her. There would be no repairing it this time.

From somewhere an alarm began its deafening wail. The man had sprinted the full length of the west wing; now he was bowling down the grand marble staircase leading back to the museum’s main entrance. The American stood wheezing amid the flotsam of the gallery.

But she was not beaten yet.

With abundant disregard for treasures of the ancients, she seized another object from the stricken cabinet. It was a stunning black-and-red vase almost a metre tall, Greeks and Amazons prancing around the piece in fussy and elaborate combat. She grabbed it by the jug handles and lugged it to a balcony overlooking the grand staircase. Then she heaved the vase up onto a banister and concentrated hard. Timing was everything; like a gunner on a First World War battleship, she needed to consider how long the shell would be in flight.

Her target never saw it coming.

He had descended the first flight of stairs and was at the foot of the second, which doubled back right under her vantage point. Such was his haste that he didn’t clock the vengeful figure emerging directly above, nor notice the priceless 30 kilogram work of art about to come crashing down from the heavens. The fleeing figure entered Heather’s crosshairs. Which was the exact moment the security guard caught up with her, flailing for the vase. Sadly for the Friends of the British Museum, there was no counteracting the momentum of his charge. The object was knocked from her hands with the impact and for one terrible moment it teetered on the banister like a spinning coin – before pitching over into space.

The vase dropped in a silent deadly rush, pirouetting daintily as a waterborne hippopotamus as it fell. But the security guard’s intervention had spoiled her aim; instead of cracking its intended target over the head it struck a glancing blow to his shoulder before shattering with acute destruction into ten thousand smithereens on the flagstones. The noise of raining porcelain seemed to go on, and on, and on. And on. The imposing figure of the Townley caryatid watched the pandemonium impassively, one marble hand outstretched in supplication. Not in two millennia had the Roman statue witnessed such devastation. Triangles of broken pottery cascaded in a tinkling wave down the staircase, the heavy bottom of the vase bouncing and spinning away like an escaped hub cap. Tourists gleefully photographed the bedlam; and through them weaved the fleeing figure who had somehow managed to stay on his feet. Clasping his shoulder, running with a drunken canter, he reached the main entrance. Then he shot out from the columned auspices of the museum and into the clanking rumble of London beyond. A black Audi was waiting on Great Russell Street – and he was away.

Back in the museum, a phalanx of security guards descended – swiftly, angrily – to complete the detention of one Heather Kochalski.